Kyoko is born in 1960, from Mr. and Mrs. Chigusa. At the beginning of our story, she's between 19 and 20 years old. We can suppose she had an happy childhood, with a housewife mother and a "salary-man" father. Her mother is named Ritsuko Chigusa, but her father's first name will never be mentioned, either in manga or in the TV series : he's called "otosan" (father) by Kyoko, "anata" (you familiar) by his wife and Chigusa-san by all of the others.

All in all, it's a middle-class family but deeply bonded by a shared love (of course, there's some arguments in the family as soon as someone speaks about marriage or about being away from home, but that's what makes it a living family...^_^)

Kyoko gets married, at a little more than 18, to her former teacher in geology, Souichiro Otonashi, with which she fell in love in high-school. Their marriage is a love based one (her father is rather opposed to it) and everything seems to announce a bright future for the young couple...

Unfortunately, after 6 month of marriage, she becomes a veuve 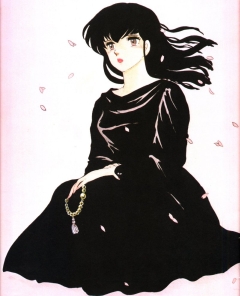 Either in the manga or in the TV Series, we will never see Souichiro's face and we will never know the exact reason of his death. We can just suppose he got struck down by a rapid disease. He was 10 years older than her.

Kyoko, devastated by her husband's death, swears to never forget him... the Souichiro character, although dead even before the story starts, will have a big part in the story. Kyoko, absolute in her feelings, can't conceive to ever love another man. Souichiro's "ghost" is very present until the very end.

And it's also one of the lessons that story teaches us : dead persons when they're idealized, can get in the way of the living's happiness. You have to "bury" them completely,once you finished to grieve for them.

Souichiro was from a wealthy family : his father, Otonashi-san, lives with his daughter in a comfortable house and owns a large house used as a boarding-house (the truth is, it's a bit old...) called "Ikkoku-kan" or "Maison Ikkoku" (which means "The house of one moment"). That kind of boarding-house, often met in the 40/50's in Japan, tend to disappear. Even when the manga was published, that kind of house was on its way to extinction.

After her husband's death, Kyoko decides to try to get over it and to get independent from her parents by getting a full-time job, allowing her to live on her own.

So she takes, at the beginning of the story, the position of "kanrinin" (manager) at Ikkoku-kan. It begins a morning, much like the other ones at Ikkoku-kan : the tenants spent the whole night to party and to keep Yusaku Godai from studying. He's a student, trying for the second time to pass the tests to enter an university (these tests are called "Juken"). That kind of student is also called "ronin", a reference to the the lone samurais in the medieval Japan. Following the tradition to call people by their occupation, the other tenants are having fun calling him "ronin-san" (meaning he's condemned to fail his exams).

During the beginning, Kyoko will even believe that "ronin" is his real first name. Relations between people being what they are in Japan, it's perfectly possible to talk about someone without ever mentioning the first name or even the gender ! And the detail shows also that mockery is an alien behavior for Kyoko.

Fed up of being unable to work and after having crushed several pens, Yusaku decides to leave that asylum and heads for the room number zero, where the manager is, to inform him of his decision. Just when he passes in the entrance, teased by the mad tenants, a young woman enters who, after having asked confirmation she's at Maison Ikkoku, announces that she's going to be that apartment manager from today and that her name is Kyoko Otonashi. The former manager having declared, literally, "I'm tired".

Petrified by that vision, Yusaku drops his bag and forgets at once all of his resolutions...

Starts for Yusaku and us, the story, full of emotions, of laugh and of cries, of Maison Ikkoku.