The other tenants and Kyoko

This site wouldn't be complete if I didn't tell you about the others tenant of Maison Ikkoku. But rather than make a short catalog, I will try to describe them in the light of Kyoko's behavior toward them. It will allow us to grasp as much her personality. So, here they are, in their numerical order (click on the name for a standing picture) : 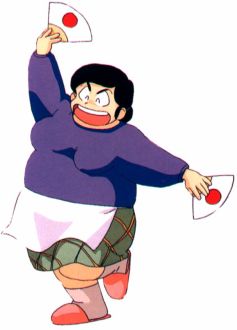 : a short (and squat) woman. An housewife, raising her son, Kentaro and married to a short salary-man almost invisible. She has two habits : drinking Sake by the liter and meddle in other people's life. She doesn't love anything more than to gossip, beside getting drunk and dancing with Japanese fans.
Her name means "First rapids" and she lives in the room number 1. Her first name, Hanae, means "Flower Branch" and evokes a much more beautiful woman than she is.
Kyoko likes her and entrusts her with her confidences from time to time, even if she knows that everything she tells her will end up in the ears of the neighborhood's women one day or another. She doesn't restrain herself to listen to her gossip anyway.
She takes more or less the role of a mother for Kyoko. In the beginning, before her widow condition is revealed, she will try to arrange a marriage (Omiai) for her with "promising young men" which she had a handy catalog.
Anyway, like with her real mother, Kyoko don't let her manipulate her.

: Young man, 18 years old, boarding a bit later in the house. He appears only in the manga and the movie. Anyway, he doesn't have much importance in the story. His main trait is to be clueless about what's going on around there and to have a twisted mind (and also, he smokes a lot).
Having landed in Ikkoku-kan by mistake (he was looking for a much better house, called "Ritsukoku-kan"), he decides to stay in order to take revenge of Yotsuya's practical jokes. His name means "two-storied temple" and so he lives in the room number 2. In the beginning, Kyoko worries about what could happen to him among the wacky tenants and thinks they could harass him. But during the war which opposes him to Yotsuya, she realizes that he perfectly fits with the others. It's a character without much depth, which is used mainly as a comic relief. Most of his lines were given to Kentaro or Yotsuya in the TV series.

:That character doesn't have a family name. Or rather, he passed off several different names throughout the series, so none knows his real name. It's one of the weirder, of the most mysterious and of the most twisted of the tenants of the house. According to Godai : "Profession : unknown, Age : unknown, Hobby : peeping at people". It's a middle-aged man, extremely sneaky and extraordinarily untrustworthy. His name means "Four valleys" so he lives in the room number 4. He burrowed a hole through the wall between his room and Godai's, to be able to bug him and eventually peep in Akemi's room.
Kyoko trusts him in the beginning, but she will quickly learn to not necessarily believe what he says and to be wary about his peeping activities. All in all, Yotsuya leaves Kyoko alone and tends to stick at Godai and Nikaido as targets for his bad jokes. So she doesn't really have anything to complain about him. Actually, I think she's more or less afraid of him. Yotsuya could be a Yakuza in cover, that wouldn't surprise anyone.

: The student I told you about in the beginning. In love with Kyoko at first sight, we will see him grow gradually from an immature loser to an responsible adult. His name means "Five generations". He lives, of course, in the room number 5, which is the meeting place of all of the crazy tenants. Kyoko's attitude toward him is going to change a lot. Actually it's one of the person with which her relationship is going to change the most.
In the beginning, she sees him as a little brother she has to take care of. She protects and supports him in his struggle for entering the university. Who knows at what moment her feelings are going to change ? Nevertheless, she's going to take care of him more and more and getting involved in his life, even if she doesn't acknowledges it's out of a growing love. Writing about her relationship with Yusaku overlaps a bit with other parts of that site, so I won't write more here.

: A good-looking young woman, around 25, with blazing red hair. She's hostess at a cafe, the Chachamaru, which is also the place where all the crew gather, when out of Ikkoku-kan. Her name means "six original trees" and she lives in the room number 6. However, her name was probably not chosen only for that reason : Roppongi is a popular entertainment district in Tokyo, where nightclubs and cabaret are located.
To say the least, she's quite loose : she hangs out all day in panties and a flimsy negligee, without paying attention to people's glance, amused by them even. With Ichinose and Yotsuya, they make the trinity that pesters and tortures Yusaku. Kyoko feels rather ashamed by that attitude of daring sensuality. But at a point, she will be jealous of her when a misunderstanding will lead her to believe that Akemi takes a shot at Godai and even that they had a physical relationship ! Seemingly a hooker and a pest, Akemi is actually rather kind and likes Yusaku and Kyoko, at least in the anime series. 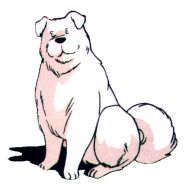 : Kyoko's dog. it's got the same name than Kyoko's dead husband and it's not a randomly chosen name, since it's former name was Shiro (meaning "whitey"). It reminds her constantly of him and she uses it as a protector. She likes it a lot, because of the memories attached to it and because it's one of the last remnants of her life with the human Souichiro. And it's an efficient protection from Mitaka -_^ . Beside that, it's a pretty dumb dog, only thinking about it's stomach. Souichiro means literally "the only husband". Nice pun, isn't it ?

Here, it's over for the tenants. Actually, there're two things to remember about their names : each one has in his name his room number (yes, the nashi in Otanashi means nothing or zero and her room, although not labeled, is the number 0) and their name match either a district in Tokyo or a Subway stop : Rumiko Takahashi likes a lot to plays with names and make puns... :).
I will talk about other characters later in this site... there's much to tell... but for now, I'm going to talk about Jealousy